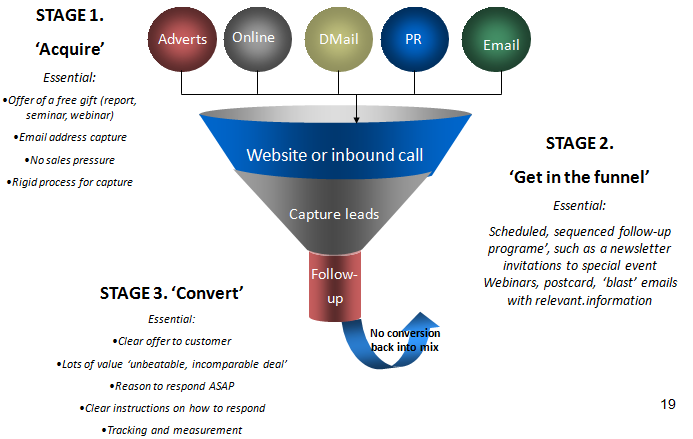 When I was launching an airline brand into the European market a few years ago, one of the features of the campaign was outdoor advertising as well as print – mainly in London media.

Within days of the campaign launch, I was inundated with phone calls from every advertising huckster in the UK.  Every possible media. Every possible sponsorship property.  They were like sharks in the water smelling blood.

Some of my favourite ones were the guys who just happened to have a last minute deal on hoardings for a rugby league match. £20,000 for the game that weekend, and it’s yours, guv’nor. A snip. A deal.

Never mind the fact that a. the airline did not fly into any of the cities where rugby league is played b. rugby league is a minority sport played a in few reasonably blue-collar parts of northern england. Given the target market for the airline was pretty-well off types living in the south-east, and near East London and the City in particular, it was about as off the mark as you can get. Really off-base in fact.

This was a classic example of a business resorting to a ‘numbers game’, and preferring carpet-bombing instead of target marketing.

What was even more fun during these phone calls, was the level of incredulousness from the aforementioned salesmen when I used to tell him I was not interested. It never ceased to amaze me. I got so bored with it, I would play games with them on the phone, but I digress.

The first step for these guys would have been to go back to the drawing board, and build a structured sales and marketing sequence, with each step being built on the one before it. People make the mistake that the sale is an ‘event’ or an ‘act’, not a process.

Our rugby league loving salesman made the assumption is that I would respond to a single sales step. Instead of promoting to generate leads, he expected to generate an instant response:

Of course, many business do exactly the same thing, whereas they should really engage in a process to find out those who are feeling pain – both now, and in the future. And to help them to recognise it!

I imagine it as a marketing funnel. Visualising it shows the step changes to get to a deal. Naturally, at any step of the funnel prospects drop out of it, and from the large number of initially interested persons on the top end, only a fraction of the initially interested people remain and actually buy or do the deal.

But that’s ok. The funnel is about building the ideal result to get the ideal prospects raise their hands, and step onto a sequence that is specially constructed for them to move along from suspect to closure.

Sure beats trying sell rugby league game hoardings to a joker like me!